What is it Like to Be Alive? Fourteen Attempts at an Answer

“Chris Arthur is among the very best essayists in the English language today. He is ever mindful of the genre’s long literary tradition and understands — as did his great predecessors — that the genuine essay is grounded in the imagination, in our quest for art and beauty, as deeply as is poetry or painting. Every young writer who wants to experience the creative possibilities of the essay must read Chris Arthur — it isn’t an option.”

On the one hand, What is it Like to be Alive? is — quite deliberately — a varied collection that displays a stimulating diversity of content. On the other, the essays all address one question. Their points of entry may be very different, but they all soon lead into the same territory. If that territory had to be given a name — beyond simply saying it’s where the question “What is it like to be alive?” is considered — perhaps Alexander Smith’s “the infinite suggestiveness of common things” might be pressed into service as a description. Whatever we decide to call it, this is somewhere that’s attuned to notes beyond the hum of the quotidian. Each of the book’s fourteen essays starts from something ordinary. But what’s easily dismissed as unremarkable soon reveals threads that lead to destinations that are astonishing. Exercises in seeing beyond the obvious, all of the essays look into life’s mirror and offer their account of what they see there, shimmering elusively behind the obscuring immediacy of surface reflections.

In What is it Like to be Alive? readers are invited on a journey through some very varied territory. The “fourteen attempts at an answer” touch on:

What is it Like to be Alive? will be published by EastOver Press in 2023

An extract from the book’s Introduction

… The essay that provides my title was pivotal in supplying the cognitive coagulation that drew the book together. It helped me to see the bloodline of ideas snaking through the individual essays. This creates the relatedness that makes them a family. My guiding question brings sufficient focus to avoid accusations of assembling a miscellany of unrelated items, but it’s not a strict enforcer of uniformity and order — such things are anathema to essay writing. Instead, the question acts as a lightly drawn emblem; it traces out a genetic watermark of belonging. In response to it, I’ve ranged over a spectrum of ideas. The value of asking “What is it like to be alive?” lies not so much in the specifics of any of the countless answers that could be given as in the space for reflection that it opens up; the way in which thinking about it attunes the mind to notes that can be missed if we only listen in the register set by our everyday preoccupations.

What is it Like to be Alive? is, unashamedly, an essay collection. That means it’s not bound by the kind of linear progression that some books follow, plodding their way, step by predictable step, from introduction to conclusion. The modus operandi of the essay is less regimented, more mercurial. Each of my fourteen attempts at an answer is independently intelligible on its own terms, rather than being a fraction of some wider calculation. Each essay is obedient not to any overarching plan but to the dynamics of its own unfolding. In putting them together as a collection I don’t want to pretend they offer a unified narrative, or that one follows logically from another. Cumulatively, the essays reinforce and reiterate each other’s concerns. And I like to think that, read together, they’ll lay upon the reader’s mind more forcefully than any on its own could manage the cadence of the voice behind them. Hearing that voice is close to the raison d’être of this genre – for “At heart,” as Graham Good puts it, “the essay is the voice of the individual.” I’ve arranged the constituent essays in a way that I think maximizes their reciprocity, but that doesn’t mean the book needs to be read in this — or indeed in any — order.

The epigraph, from Mary Oliver’s marvellous poem “Bone,” [see below] is not meant to suggest that I’m on some sort of religious quest, or that I give credence to the simplistic sense of soul that sees it as a kind of homunculus inhabiting our flesh, an ethereal essence within our lumbering corporeality. I see it rather as convenient shorthand for precisely what is sought in explorations sparked by asking questions like “What is it like to be alive?” It’s a term that indicates a realm beyond the commonplace where a sense of wonder at existence blazes, accompanied by amazement at our fleeting sentience. Without wishing to map the relationship between soul and language, I agree with Sven Birkerts that there’s significant linkage between them. He puts it nicely when he says, “Language is the soul’s ozone layer and we thin it at our peril.” Whatever else it achieves, I hope What is it Like to be Alive? provides some robust and enriching thickening.

Understand, I am always trying to figure out
what the soul is,
and where hidden,
and what shape –

“The essay has a knack for disturbing platitudes, questioning the accepted and rethinking the known.” 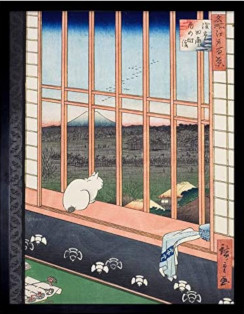 “A Lament for Tama” makes reference to this woodblock print from Hiroshige’s One Hundred Famous Views of Edo. 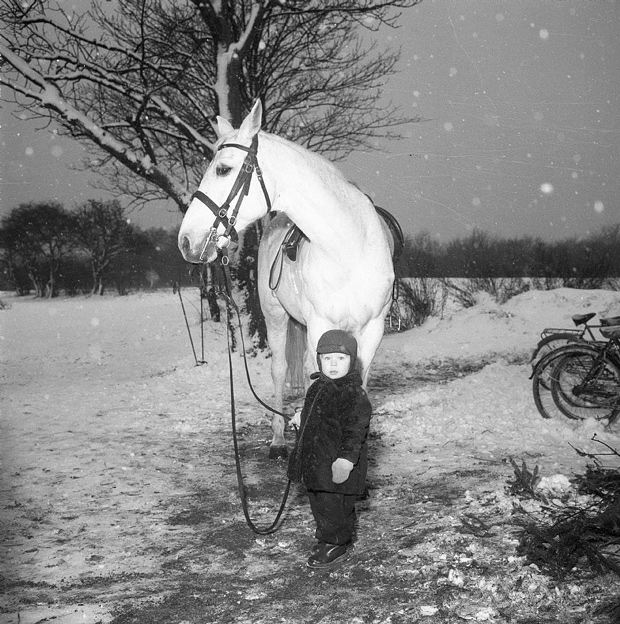 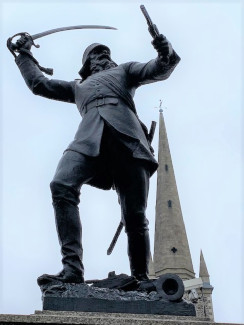 “Nicholson’s Horses” features this statue of John Nicholson (1822-1857), which stands in the centre of Lisburn, a city located eight miles southwest of Belfast. The photograph is by Manfred Hugh from Wikimedia Commons. 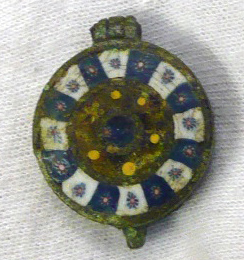 One of the items mentioned in “Images of Hallow Hill” is this seal box. Made of bronze and “millefiori” – meaning “thousand flowers” – a technique of using coloured glass, this beautifully worked artefact lay for 14 centuries in a child’s grave before being found by archaeologists. 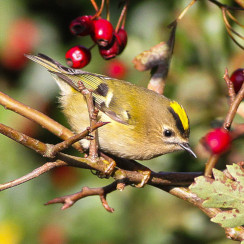 “Learning to See Goldcrests” focuses on Europe’s smallest bird. This photo of a goldcrest (Regulus regulus) is by Ron Knight (taken from Wikipedia Commons). The essay suggests that: “If we’re to grasp what a goldcrest is, we need to pack a great deal more into its name, ensure the range of connotation that it carries is extended so that it echoes with more than a few of the obvious visible features it possesses… the name hints at something fluid, a glittering filament that spans a massive temporal distance, ancient yet still dynamic; a mercurial rivulet of life.”

This old school photo provides the starting point for “In Transition”. 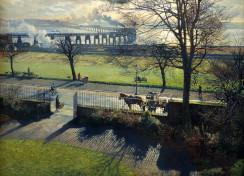 “Caging the Minute” makes reference to “The Tay Bridge from my Studio Window,” a painting by James McIntosh Patrick (1907-1998). Patrick was one of modern Scotland’s most popular landscape painters and an artist closely associated with his native Dundee. 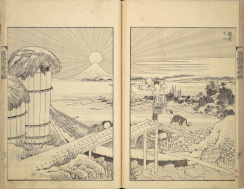 “Picturing the Day” refers to this image, from Hokusai’s One Hundred Views of Mount Fuji. It’s sometimes referred to as “Fuji as Mirror Stand” – because the round disc of the sun is seemingly held like a great circular mirror, resting on the mountain’s summit.